You are here:
FishingFishing TipsUncategorised 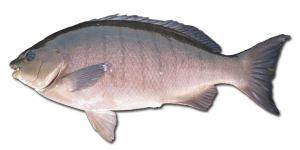 Winter is the time of year the Luderick start to pull down floats along the Nelson Bay Break-wall. I have fished this break -wall for 25 years and today I will discuss methods that have served me well and will hopefully help increase you’re catch rate.

Luderick, which are commonly known as blackfish, start towards the end of May through the winter months sometimes up until November although the condition of fish at that late stage are average.

Blackfish are a herbivore with their diet mostly consisting of weed and ocean cabbage. They do on occasion take the odd prawn or yabbie although, if you take 1 fish on these baits, I’d suggest many more would be taken on their natural baits. 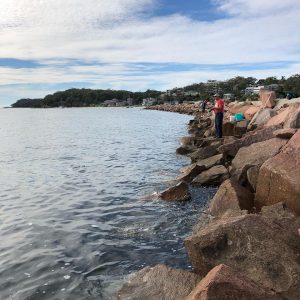 Outside on main break wall

This area located in the heart of Nelson Bay at the end of Teramby Road offers some of the best black fishing on the New South Wales coast. There are options to fish on either the outside wall or on the inside into the Marina. This area is well protected from Southerly winds although the outside of the wall is fully exposed to the dreaded westly winds.

At the beginning of the season the fish appear to school on the inside of the marina and are more active in the afternoon. If you decide to fish the inside the more popular spots are around the Coastal Patrol mooring and ‘Simba’ which is a large moored boat. The outside offers many spots from the car-park up to the ‘Steps’.

There is a slight parking cost just be aware.

Fish can be taken throughout the entire day unlike other fish blackfish can feed throughout the day, although are not as active at night. I prefer to fish around the change of tides and I like dead low water as I can get right down to the waters edge. Roughly, 1 and a half hours before low water then 1 and a half after.

It will run, incoming tide the water flow will push your float West and out going tide the water flow will push you’re float East. As the tide approaches either it’s peak or low the drift will slow and eventually come to a complete stop. This is known as the ‘slack water’ it will then start to move again in the opposite direction. The speed the water will run is based on the size of the tide and or the difference water levels between the two tides. Full moon phases are a factor to larger tides.

In summary aim to fish the change of tide phase roughly a 1 hour each side. 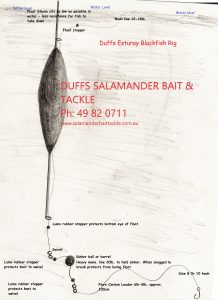 When it comes to estuary blackfish rods the CR4126 is a very common model – Club Rod taper 4 wrap fiberglass 10ft 6 in length is a slow taper light to hold. This rod does not lift well as It’s purpose is to fight the fish to the net. With soft tapered rods & light leaders a long handled net is required at least the length of the rod. A number of rod models are made in 11ft4inch and the ocean blackfish rods are around 12ft if you’re not able to get down the rocks to the waters edge these will give you greater control & lifting power. My reel choice is a centerpin style reel which is free-running, this allows the float to be cast directly into the water, bottom stem first which will avoid the leader falling across the top eye of the float. This reel gives more direct control to letting out line, once mastered there is no other reel I would use for this style of fishing. In saying that spinning reels are acceptable & will work , smaller Baitrunner styles are better suited. 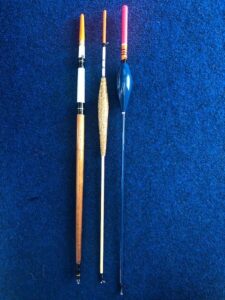 Choice of floats are wide & varied I prefer a pencil or light stem float, both are completed unweighted & free running. Ensure the bottom eye of the float is sturdy as it will suffer damage from the sinker hitting it when striking.

Black fishing rigs are a little more complicated than the normal set-up; see

I will explain; main line is between 12lb-18lb I recommend floating mono-line where possible. I use Dango wax. I prefer my main line 16lb mark as it’s subject to fraying on the rocks and heavier main line will give you more room to move if this occurs.

First slid the rubber stopper onto your main line, then next the float. Ensure the rubber stopper is bigger than the top eye of the float and doesn’t go through. You can add a small red plastic bead to assist with this, which also acts as a visual aid so that you see that the stopper has hit the top eye as the bead will be in the middle.

Then run your main line through the float eyes, add a soft lumo bead then tie -off to a small swivel, I prefer to use black crane swivels around size 8.

Then add heavy mono. say 20lb-30lb around 6-10cm first add another lumo bead, then you’re running sinker, ball or barrel then a further lumo bead and tie-off to another swivel.

The lumo beads are in place to act as shock absorbers. The heavy mono. will ensure that when snagged the light leader will break leaving your float attached.

Then tie on the leader 6lb-8lb fluro carbon which I prefer FC Rock from Sunline due to its rock resistance there are many brands on the market.

Then the hook, I use a size 10 pan fish hook from Gamakatsu I recommend size 8-10 hooks other well-known brands are Mustad 540, Mustad Beak, Mustad Sneck and many more.

Two hook rigs are common although, if you’re starting out, I recommend you fish with 1 hook, which is all I use.

Using weed, I recommend tying a loop knot which will create a solid foundation for the weed then simply twist down the shank of the hook leaving the point exposed then continue leaving a small tail under the hook. DO NOT make the tail too long as the fish will chew it off and you will not hook-up.

Weed expands in the water so LESS is MORE – don’t bunch it up. 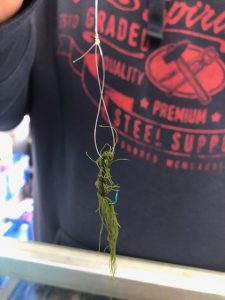 Weed using a loop knot – NB: keep the tail as short as possible

Storage – I store weed in a foam box with lid, cool and dark.

Using cabbage, I prefer the light green pieces found in the rock pools, simply take 1 small leaf and pull it up over the eye of the hook then add a light half hitch to help hold the bait on. 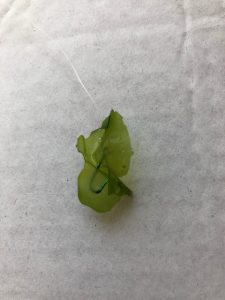 Single leaf of ocean cabbage then gently apply a half-hitch

Storage – I leave cabbage in a fish box of salt water open to the elements.

Your berley should match you’re bait 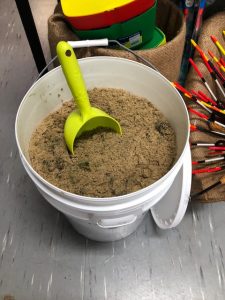 Finely chop up either weed or cabbage dependant upon the bait used – then add to sand. I prefer sand from ocean beaches such as Birbui as it seems to hold together well. The sand is the delivery device, wet the berley mix make into a ball and throw with every cast. Make sure it sinks and disperses a few feet under water.

If fishing the outside of the break wall then I suggest set your depth at around 10ft, if fishing the inside then around 6ft mark. Adjust depths as required.

Ensure the float is sitting low in the water as this will offer less resistance for the fish to take it down, when they are timid this will make a huge difference.

Work the drift, for example; cast to your right on an incoming tide on the outside of the wall, then throw the berley further right of the float. Let the float drift naturally, letting main line out as the float moves, hence a centerpin style is advantageous.

The float will behave in a number of ways;

Striking and setting the hook; fishing with ocean cabbage and weed are slightly different other than the way it’s applied to the hook. The fish will take these baits in different manner, cabbage they appear to get more directly whilst with weed they take from the bottom working up the weed tail to the point of the hook.

As a general rule during a ‘down’ I suggest the float remain under water for the 3 second rule prior to striking, if using a 2-hook rig then the longer left the more change of a double hook-up. Although, if fishing with cabbage then at times the strike can immediately follow the ‘down’ with success, BUT many fish can be lost at the net because they are not hooked correctly

When striking it’s simply a matter of lifting sharply, the small blackfish hooks are super sharp so there is no need to rip the float out of the water and over your shoulder. 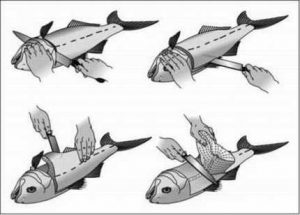 Looking after the catch:

The fish need to be bled; I dispatch the fish upon capture by breaking its neck. I gut and gill the fish leaving the scales on.

The fish remain in the fridge crisper for a day or two, which firms the flesh prior to filleting. I remove the head and take the fillet from head to tail. From the tail fillet end I then skin the fillet; the scales offer a solid foundation for skinning. Wash in salt water. 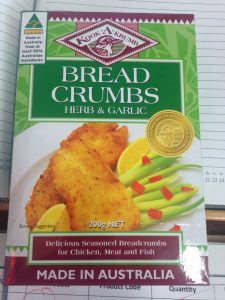 I lightly coat in bread crumbs and then shallow fry.

I hope this information has been helpful, any questions please call the store or pop-in and ask.